It’s time for another Sweet Saturday Samples! Ryan needs to see for himself what the doctor has said is true. 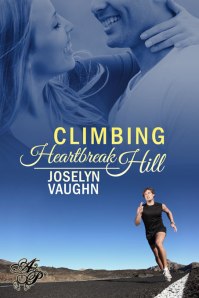 After lying in bed tossing and turning for the better part of
the night and waking up after short bursts of anxious sleep, he
needed to burn off the haze.
The doctor’s words rattled around in his head. You won’t run
again. He couldn’t cement the prognosis into his reality. He tried to
travel forward, beyond the agitation, away from the news, but
continually circled back to when his next run would be, how he
would ease back into training, what race would be his re-­‐‑entry into
competition.
Then he’d remember.
He wished the doctor was wrong. A second opinion, that’s
what he needed. Another specialist would see it all more
optimistically and recommend a treatment. But why wait for two
weeks and another terrifying twenty minutes on a crinkling exam
table? He could run now. He’d get all the answers he needed.
A good run would settle his brain. It always did.
He looked out the window. The cool, damp morning air
called to him. He wanted to be enveloped by the light fog with the
pound of his footsteps driving out the anger and frustration.
He donned his favorite T-­‐‑shirt whose fabric was so worn it
was as light as air and laced up his running shoes, reveling in their
familiar hug on his feet.
He abandoned his cane by the garage and hop-­‐‑stepped
down the driveway, anxious to be rid of the lethargy in his
unexercised body. At the end of the driveway, the pain and
frustration faded away. He was a runner. Alone with his miles.
His limp-­‐‑steps to the sidewalk lengthened into a running
stride. He moved tentatively, bracing for the pain. As his left foot
rolled through the next step, he placed his right foot more
confidently. His body remembered, despite the inactivity and the
injury. His body remembered what it was meant to do.
He slid into his normal gait, the easy stretching steps. He felt
comfort in the rhythmic movement. There was no pain in his knee.
He felt like himself for the first time in six months.
It barely lasted a block.

Check out the other Sweet Saturday Samples.

If you liked this snippet, check out my books at http://amazon.com/author/joselynvaughn or at your favorite ebook retailer. Don’t forget, Climbing Heartbreak Hill is on sale for 99 cents for a limited time (Amazon only). Perfect time to pick up a copy. Have a great day!