Fridays off the Wall with Sandy Cody 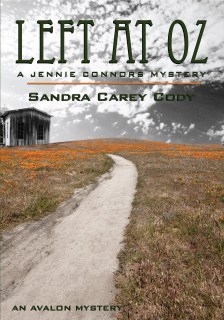 Today I’m welcoming fellow Avalon author Sandy Cody to Friday off the Wall. Sandy’s newest book, Left at Oz, is a Jennie Connors mystery.
Joselyn: Who would you cast as the main characters in a movie of your latest book?
Jennie Connors – Keira Knightly   Since the book is set in Memphis, Tennessee we’d have to change her lovely British accent to one appropriate to the American south. I know. That’s a sin, but I hope it’s forgivable because I really want Knightly. She projects the combination of intelligence and innocence that I imagine for Jennie.
Tom Connors – Jon Hamm  He’s Jennie’s handsome husband, the one who swept her off her feet and married her after a whirlwind three-week courtship. Handsome as Tom is, he can be a little unbending sometimes. If you’ve ever watched Mad Men, you know Hamm can be that. And, yes, I can imagine being swept off my feet by him.
Nathaniel Pynchon (Nate) – Peter O’Toole  This is a bit of a cheat because Nate isn’t actually in my latest book, but I want to include him because, of all the characters I’ve ever written, Nate is the one for whom I knew from the start who the perfect actor would be. It’s those blue eyes, at times angelic, at times downright maniacal.  Nate is an 84-year-old retired Shakespearean actor (if actors ever truly retire). He believes that rules were made for other people. He’s self-centered, arrogant and has a lot of faults, but Jennie loves him and so do I.
Joselyn: What is the most unexpected thing that has happened in one of your books? As in you didn’t expect it until you wrote it?
Chapter one of Left at Oz begins with Jennie looking for her stolen car and ends when she finds the car with a body in it. In Chapter two, she is at the police station being and is thinking of her two young sons, wishing she could shield them from the ugliness of the world. She recalls the scene at breakfast that morning. She was upset but the kids were thrilled because “…nothing like this ever happened to us before”. They were clamoring for all the gory details, especially anything about the cop’s gun. As Jennie is trying to divert their attention, Andy (the six-year-old) starts chopping up the banana slices floating in his cereal and arranging them into the shape of a gun. I didn’t expect him to do that, but it became one of my favorite scenes and I used it to foreshadow Jennie’s subsequent actions.
Joselyn: Isn’t it great when that happens.  Something you wrote that you thought was incidental actually really defines a character or sets up an action. Do you have any characters who keep bugging you for their own book? Will you give them one?
Emma Malich is a minor but important presence in Left at Oz. One of the other characters refers to her as “that crazy old flower lady”. She’s an older woman who lives alone on a farm in the middle of nowhere.  Her house, set in the middle of dusty cornfields, is framed by a profusion of flowers and is the inspiration for the title. She’s independent, feisty and has an aura of down-to-earth elegance about her. (Picture Katharine Hepburn in her later years.) I know Emma has a story just waiting to be told and, yes, I may give her a book of her own.
Joselyn: What one thing would make your writing space perfect?
Good question. I thought about this for a while and rejected the first few things that came to mind. Then it hit me. What I really need is a Time Machine. I don’t mean a machine that would transport me to a different period in history whenever I wanted (though that could be fun). I’d like a machine that expands time. I could set the dial and add an extra hour or two and … viola … my house would be spotless; my gardens weedless; I could start a new quilt and still have all the writing time I want. And I’d make sure I had time to waste or, as I prefer to think of it, daydream, an essential activity if you’re a writer. Not possible? Ah, but wouldn’t it be nice?
Joselyn: What author would you be delighted to be compared to (in a positive way, of course)? Is this your favorite author?
Alexander McCall Smith. I love everything about his work: his intelligence, his sense of humor, the subtlety with which his characters are drawn, the way he brings his setting to life. As I said – everything. Choosing one favorite author is tough. I just finished Faithful Place by Tana French and loved the gritty humanity of it, but I can’t imagine writing like her. And there are many others. I’m almost always in awe of the author of whatever I’m reading at the moment. If I have to pick one living author though, it would be Smith. He writes several series, with completely different settings and makes me feel a part of all of them. Most of all, I love spending time with his characters.
I really like Alexander McCall Smith for the reasons you describe.  The poor sausage dog series just cracked me up and the books about Portuguese irregular verbs.  What a hoot!
You can find Left at Oz on Amazon.

Hope you all have a great weekend!

Soooooo close!! This has been quite a journey and it has been so fun to find my niche (kinda). 700th sale gets a special discount. It could you… scrappyremnants.com